BOOK REVIEW: Tim Hwang’s Subprime Attention Crisis: Advertising and the Time Bomb at the Heart of the Internet When was the last time you clicked on an online ad? Probably, it was an accident, a so-called ‘fat finger’ click, and you exited immediately without noticing what was being sold to you. This prompts the question: is online advertising actually effective?

Tim Hwang’s recent book Subprime Attention Crisis: Advertising and the Time Bomb at the Heart of the Internet uses this as its launching point. Hwang argues that not only is online advertising far less effective than assumed, but also that the industry is opaque, fraudulent, and dangerously overvalued. Hwang warns of the potential for a crash — convincingly comparing online advertising to the subprime mortgages crisis.

The book offers three main arguments. Firstly, that the marketplace is dangerously opaque; both because of its scale, automation, and real-time responsiveness, and also because the big players (Google and Facebook) refuse to disclose data. Secondly, Hwang argues that there is a society-wide decline in the quality of attention that these ads can capture, due to younger users reflexively dismissing ads and the use of adblockers (in 2017, Deloitte estimated that three-quarters of North Americans use some form of ad blocking regularly, with Adobe estimating in 2015 that ad blockers cost the industry $21.8bn in global revenue per year). Thirdly, Hwang shows that there is widespread fraud, particularly in the form of click farming and botnets, that make it hard for companies to know if their ad will actually be seen by real humans; Hwang references a Google report from 2014 which suggested that 56.1% of ‘all ads displayed on the internet are never seen by a human.’ Taken together, Hwang’s time-bomb metaphor seems worryingly apt.

In 1994, in a quiet suburb of San Francisco, Wired magazine deployed the world’s first banner ads. At that time, these ads generated a staggering click-through rate of 44%. Almost half of the people who saw them, clicked them. Contrast this with 2018: one data set taken from Google’s ad network estimated an average click-through rate of 0.46% (many estimate lower). Hwang summarises: ‘Public indifference towards online ads is reflected in the surprisingly ambiguous empirical evidence that these ads do anything at all.’ This is a shocking departure from common belief. Normally, online advertising – particularly programmatic advertising (the buying and selling of ad inventory by software programs every time a webpage is clicked on) – is lauded for its measurability and effectiveness. Famously, these ads can target a specific demographic, and it is easy to collect information about how many times they’re seen and how they’re interacted with (did people linger before scrolling past? did they click-through?). However, Hwang points out that while it is indeed easier ‘to get granular information about a given ad that you have placed’, it is ‘far harder to get a sense of the overall marketplace’ or even to determine basic information such as how these ads are priced or where they will be deployed. This makes it easy for industry players to overstate their effectiveness and manipulate optics. For instance, in 2015 Facebook was reprimanded for overstating the effectiveness of video ads, and in 2017, it was pulled up for claiming to be able to reach 25 million more 18-to-34-year-olds in the US than actually existed according to census data.

This murkiness paves the way for large-scale fraud. In 2018, a study by Adobe concluded that around 28% of all website traffic showed ‘non-human signals’, indicating it was produced by click-farms or botnets. Hwang argues that there is little incentive for the industry to tackle this problem, given that ‘fake traffic driven by click farms and botnets makes ads look better and more effective than they actually are.’ However, this severely reduces the trust companies can have when purchasing ads: Forrester Research concluded that in 2016, more than half of all spending on online display advertisements was wasted on fraudulent or unviewable inventory. In summary: ‘Online advertising inventory is increasingly dubious, whether it is ignored, blocked, or entirely fake.’ For Hwang, the inevitable outcome is for this bubble to burst. 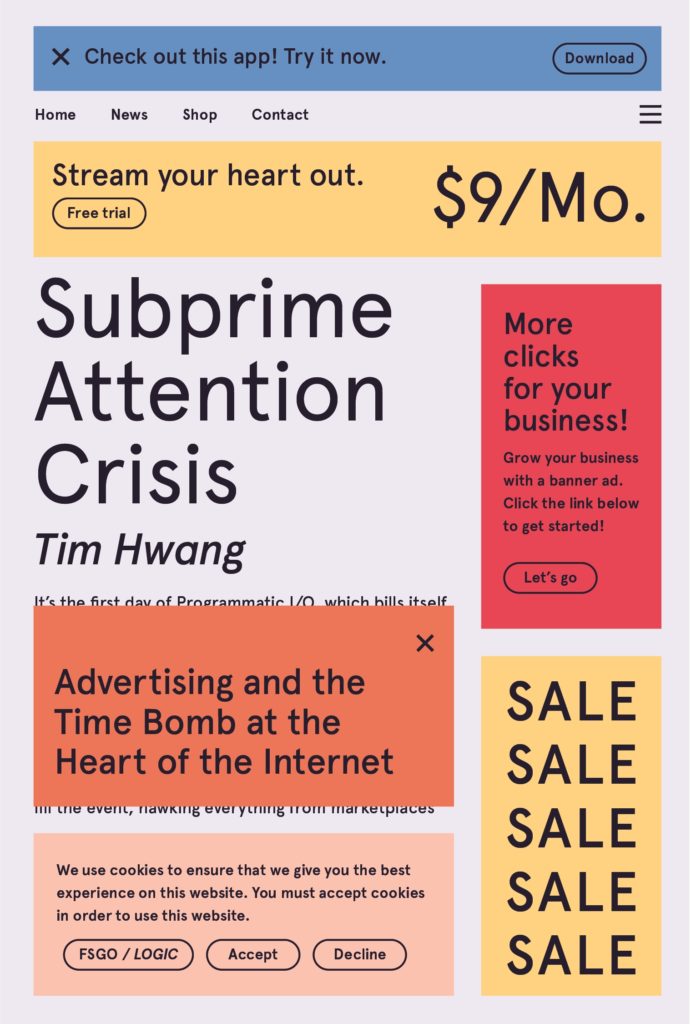 In his latest book, Tim Hwang questions whether online advertising is effective.

Throughout the book, Hwang offers an extended comparison between the programmatic advertising industry and the subprime mortgage industry before the 2008 crash. This framing allows Hwang to sidestep some of the hairy ideological questions about internet censorship, free speech, surveillance capitalism, and echo chambers. Instead, he makes a simpler case: this is bad economics and bad market regulation. The author also takes some of the mysticism out of the tech industry, reducing the problem to basic principles: we should be worried when a marketplace is opaque, an asset is likely overvalued, and key players are incentivised to withhold information and inflate prices. This shows a way forward: Hwang advocates forming an independent organisation, perhaps modelled after the National Bureau of Economic Research, to conduct authoritative, widespread studies which shed more light on the industry, as well as introducing more regulations around disclosure. These strategies draw lessons from both the 1929 Wall Street Crash and the 2008 global financial crisis, arguing that the first step to avoiding bubbles and crashes in a marketplace is to make more concrete information available so that it can regulate itself.

Importantly, Hwang’s work shows that the structure of today’s internet is the result of yesterday’s decisions. This fights the feeling that the internet is a runaway train, beyond our control. Keyed into the frequency of the problem, Hwang is compact, snappy, and responsive to the moment. His argument is compelling, and the stakes are high — as he points out: ‘Shifts in how attention is bought and sold will have major consequences not only for our everyday experience of the web but also for how the internet affects broad questions of expression, identity, and democracy.’

Subprime Attention Crisis: Advertising and the Time Bomb at the Heart of the Internet is published by FSG Originals